Lifewater back to Buhuhira with the Aall Foundation

Lifewater back to Buhuhira with the Aall Foundation

Our Ugandan Lifewater Team were able to go back to Buhuhira in September with the latest roll-out of Lifewater systems, sponsored by The Aall Foundation.

Buhuhira is located in the Rwenzori mountainous ranges in Kasese district in Uganda. This area takes its water from River Kuruhe. People from this village have had very many cases of typhoid fever with many requiring operations due to perforation of the intestines.

The distribution took place at the Buhuhira church and Buhuhira primary school playground to maintain the required social distancing. We obtained permission from the Resident District Commissioner Kasese district for our upcoming activities. He requested us to work closely with the Buhuhira Gomborola Intelligent Security Officer (GISO). The Team were honoured to be working with him.

During the distribution we maintained the Government’s Standard Operating Procedures because of Covid-19. During registration, beneficiaries’ temperatures were taken and people were encouraged to keep their masks on.

Our Team reports that the local AYA group members were very helpful during the distribution. Some prepared their meals while others helped in the distribution. The AYA team had carried out proper sensitization of the beneficiaries and over 80 had already made stands. They also helped with the training of new beneficiaries especially with the ‘hands on’ part.

AYA members were very appreciative for the allowance given to them for the work they did and reaffirmed their commitment to the monitoring and follow-up in their area.. 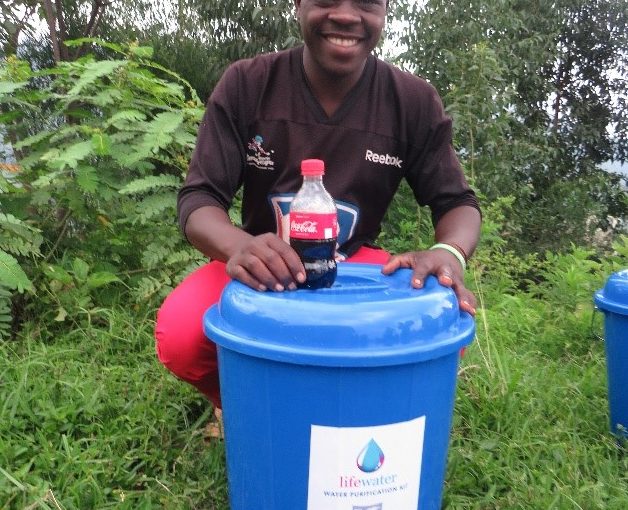 During this distribution we had testimonies from over 20 former beneficiaries who came to extend their gratitude for the ‘medicine-like’ help we extended to them. They consider the Lifewater kits a cure for their unsafe water. Many who had many relapses of typhoid. even after trying to take boiled water, testified that they have never got any relapses from the time they started using Lifewater systems.

During the distribution we had one whose son had an operation due to perforation of the intestines due to typhoid fever.  He was very hopeful that with the medication he received from the hospital and taking safe water his son will not have any relapses. Our coordinator, Pastor Andrew Baluku, is very appreciative of the help that has been rendered to villages in his area, with thanks to The Aall Foundation for making it all possible!