The Africa Youth Award is a Youth Training project that we have been running for some years across East and West Africa. It majors on discipleship training, community work, developmental skills and recreation. In the last few years, many of the groups have been assisting in Lifewater Systems Distributions and follow up monitoring, as part of the skills section of the Award.

Recently, we have ben receiving significant funding from The Aall Foundation, who also fund a large part of the Lifewater programmes that we run.

The Chair of our UK Board, who also leads the Africa Youth Award department, was able to visit Uganda in November 2021 and visited 7 different locations where AYA groups have been running for some years.

The objectives were to carry out refresher training with the local leaders and encourage them in the wonderful work they are doing; to get feedback from the groups as to progress and challenges, and to see that first hand. A 2-day refresher training was carried out at each location.

The aim of the training programme was to:

The local leaders hard at work!

Sample report from one of the local visits carried out

The team visiting Katoma consisted of Stephen, Doreen, and Glenys. The aim was to meet a new Silver AYA group and other past participants of the Africa Youth Award and bring encouragement to the participants, hearing testimonies of the groups progress.

On the 1st day of the visit: the youth had prepared presentations in dance, song and displaying the work they had achieved through being a part of the AYA.

Many testimonies were given of how the AYA skills section had been a source of sustaining them and some of their families during these difficult times of Covid-19. It was also apparent that the discipleship course had helped them to have faith in the Lord to protect them. For this they were eager to give thanks to God.

At a point in the day, I was asked to address the young people – I encouraged the youth to consider what they had learned throughout their involvement in AYA and how they should ‘sow’ back into their communities and expect to reap good fruit from what the Lord has given them to do. Also, encouraging them also to train others with their knowledge of skills and discipleship.

Kapipa Stephen also added words of challenge and encouragement as to how far they had come and the work within their community.

Later in the day the youth had organised a game of volleyball – this is one of the ways they fulfil the physical recreation and wellbeing section of the award. It was great fun and, with other villagers coming to cheer the teams on, it was more of a celebration and witness than we could have organised.

On the 2nd day of the visit During the morning Sunday service, Glenys was again asked to speak. This was received very well with many of the congregation responding by renewing vows and accepting Gods plans and purposes in their lives.

On a high note: Presentations and thanks were given to the leaders in Uganda and UK. This was the ending of a good time all around. There was evidence and encouragement at how our teams are working effectively in hard times.

Some Testimonies from the various groups 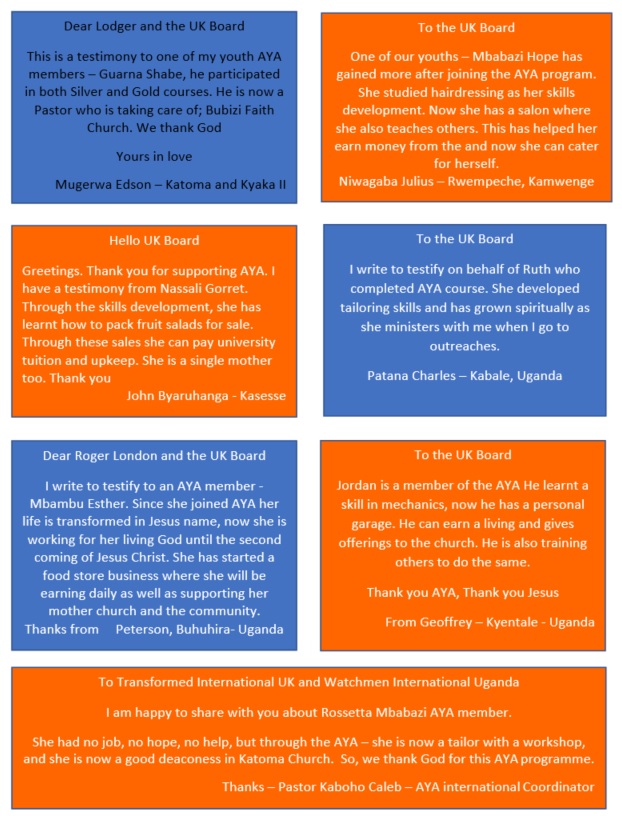